Following directions from the Jenkins site, these are my notes to configuring a base Jenkins setup on Ubuntu 12.04. Let’s first start by adding the jenkins repository, refreshing the apt repository listing, installing, and starting up:

By default, you’ll be able to reach the jenkins server over HTTP on port 8080. Here is the screen you are greeted with: 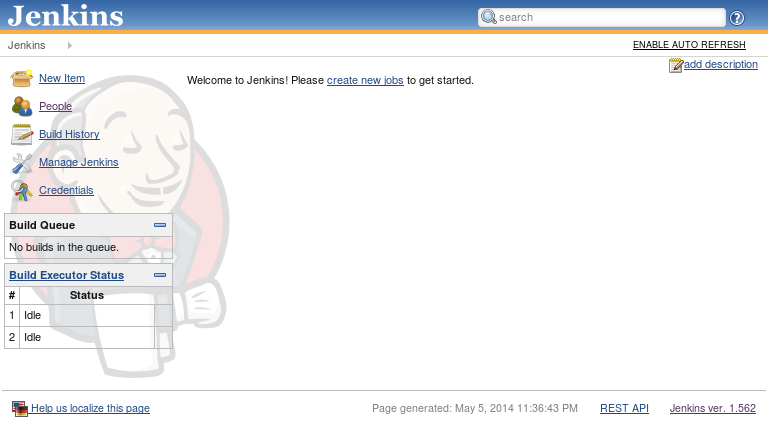 Our jekins configuration files live at /var/lib/jenkins which happens to be the home directory for our new jenkins user. Here is a default directory listing upon installation:

Jenkins is configurable with community plugins. For my project, I wanted to include git support but by default jenkins only supports CVS and subversion. Turns out you can easily install plugins via the web-interface. Make sure you already have git installed on the jenkins server. From the main page:

Run tests against a git project

From our main jenkins page:

You can manually kick off a build from the Jenkins job page using Build now. You can follow it live with the console view to see the output from the scripts. The git files will be pulled into your build workspace which for our Ubuntu install was /var/lib/jenkins/jobs/project_name/workspace/

You can tie a build into your git repo using a git hook and by supplying a specially formatted HTTP GET request to your jenkins server. You won’t have to authenticate to jenkins to kick this off, so just keep that in mind during deployment. It is recommended to use curl to kick this off using the following format:

The git jenkins plugin will determine what jobs are associated with the <URL of the Git repository> and start those builds. You’ll need to setup some kind of polling configuration on the job in order for this to work right.

Overall it was fairly painless to get it up and running for testing purposes. I didn’t do any due dilligence to lock this down in my vagrant environment but that would be a primary concern for me when rolling this out in a production environment.